Legboot is made up of a series of live recordings from the band’s “Summer Shrooming” tour of 1995.

A handful of tracks recorded at various venues issued together in a fan-only release.

This was released on cassette only via the fan club, and features a hand drawn cover by Bruce. 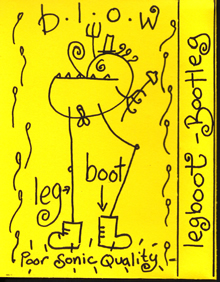